Photos and article by Nancy Truman

It isn’t every day you get to feel like royalty, which is how I feel when a shiny black Audi A8 draws up to my hotel in Chur and a young woman steps out to come round to open the door for me. Unused to fuss, I wave her off and jump in beside her for the 20-minute drive to Schauenstein Schloss Restaurant Hotel.

As we exit the highway, she draws my attention to a sign proclaiming Fürstenau, Switzerland the smallest city in the world, a status it’s claimed since 1354. Could this be why so many tourists come here from France, Germany, Italy, Britain and even the U.S.? I think not, after all, with just 345 residents, the village takes us seconds to transverse.

As we arrive at the small 13th–century castle – I’ve seen larger manor houses – as if she’s read my mind, Jana Ritsch offers: “Everyone comes here because of Chef Andreas Caminada.” Ritsch included: When the opportunity to work with one of Switzerland’s star chefs presented itself, Jana said, she didn’t hesitate to put her hospitality degree on the backburner to learn the business from the ground up.

My three-hour lunch at Schauenstein Schloss Restaurant – which has three Michelin stars, 19 GaultMillau Switzerland points, and ranks 73rd in the World’s Top 100 Restaurants – was befitting of royalty, from the welcome glass of bubbly to the service and food. But, even if you don’t get a seat at the castle’s table, the Swiss German canton of Graubünden, has plenty more worthy tables.

It’s an unusually warm mid-October afternoon as couples and groups of friends, a glass of Crémant in hand, pore over menus while admiring the view from the terrace of the sun-splashed town and distant white-capped mountains.

Chef Andres Caminada, who bought Schauenstein Schloss in his home canton of Graubünden in 2003 to open a boutique hotel and signature restaurant, perfected his craft in the kitchens of some of Switzerland’s top-ranked restaurants and at famed three-Michelin-starred Chef Claus-Peter Lumpp’s Restaurant Bareiss in Baiersbronn, Germany. I have eaten at and written about Bareiss, so I quickly agree to the six-course menu here with local wine pairings, only substituting sweet breads for a surprise course. (The castle has an impressive menu of old world wines and a smattering of new world labels — albeit none from Canada — stored in its new wine cellar.)

My introduction to Chef Caminada begins with a parade of amuse-bouches – each a full sensory experience of salty and sweet; cold and warm; and smooth and crunchy – starting with a beetroot sorbet. His philosophy is to marry quality, seasonal and for the most part local produce, in a way that stimulates more than your taste buds. My favourite, a soup spoon of sweet corn niblets, served with tangy frozen yogurt and a paper-thin corn-syrup crisp, washed down with a shot glass of soothingly warm corn syrup, exemplifies that. 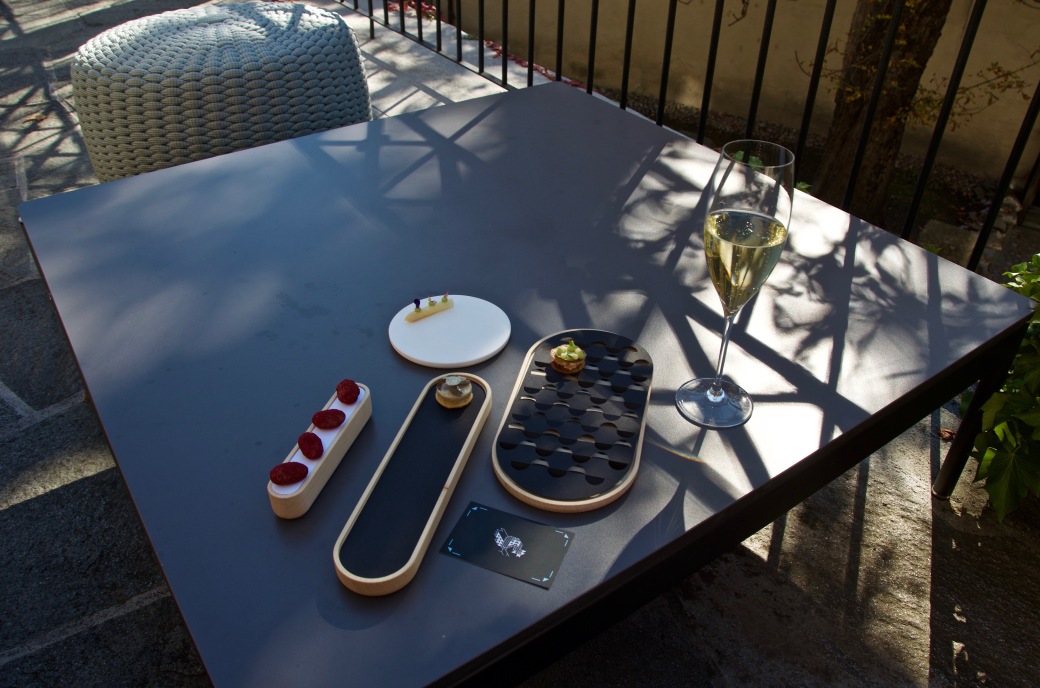 Lunch at Schloss Schauenstein began with a parade of amuse bouche served on the terrace. Photo/Nancy Truman

In the dining room, as my eyes adjust, I notice single spotlights hovering over the tables where the plates sit, and the all-female staff (one for every two guests at a table), as if choreographed, serving in unison. Time blurs as I make my way through several more amuse-bouches: a delicate white fish seasoned with onion, celery and saffron and red-cabbage and mustard ice that was paired perfectly with warm potato bread – crunchy exterior and airy inside – among them. For the main courses, there’s pickled pike-perch from Lake Lucerne topped with a buttermilk, lime and pike-perch mousse and razor-thin radish slices; Normandy Lagoustine with brown butter and a sweet lemon confit; lightly cooked trout from nearby Wallensee with braised fennel and herbs; and a grilled filet and crispy belly of Tripoli pork (bred locally) with braised mushrooms, pickled tomato and dried onion.

From a laden trolley, I choose a local soft, bark-aged cheese, a goat cheese and a smooth Jersey blue. Dessert is a pickled plum ice, paired with a yogurt mousse, verbena granite and a comforting warm soufflé dusted with icing sugar. This course is paired with a noteworthy Vintage Pinot Noir 2015 from Winery Eichholz in nearby Jenins. Not a trained winemaker, owner Irene Grünenfelder nonetheless produces some of the region’s most sought-after wines using observation skills she honed as a journalist.

By the time it was done, I was ready for a nap: A good reason to book one of a limited number of the castle’s suites.

The Swiss are fond of saying their wines are one of Europe’s best-kept secrets, and for good reason. On a cellar tour of the 120-year-old Donatsch winery, fifth-generation owner Martin Donatsch tells me the 30,000 or so bottles he produces each year from his six-hectares of vines quickly sell out, mainly to high-end Swiss restaurants. To keep up, Donatsch focuses on producing a few key high-quality wines, including the fine Crémant served at Schauenstein Schloss, and a variety of Chardonnays and Pinot Noirs. It also is among a handful that are producing the somewhat rare Completer, first planted around Malans in 1321. The wine the Benedictine monks named for the evening service (completorium) at which they were allowed to drink a glass in silence, began disappearing in the 1960s. Harvested late in the year, Completer produces a rich, strong wine, with natural acidity and sugar.

On a wine cellar tour of the 120-year-old Donatsch winery in Malans we finish with the late harvest wines. Photos/Nancy Truman

None of these wines are exported or sold in Swiss shops: To taste them you’ll either have to eat at one of Switzerland’s fine restaurants or stop off at Donatsch Weinstübe in Malans for a tasting flight and a charcuterie board. I hoped to pick up a bottle of the 2015 late harvest Pinot Noir, but there was none to be had.

Leaving Donatsch, my eye is caught by a sculpture leaning out an upper window. The building is home to Peter Leisinger’s sculpture gallery where he hews logs into life-like figures with a chainsaw. It is worth taking a walk around the gallery.

Afterward, I head to Hotel Weiss Kreuz’s rooftop terrace in the heart of Malans for lunch. Chef Stefan Jäckel’s kitchen has earned a Michelin star and 15 GaultMillau Swiss points, producing exquisite meals at fair prices while working with local winemakers, farmers and hunters. Looking out at vineyards painted with autumn’s brush, spilling down the base of the mountains, I munch on delicious hazelnut bread with lime-flavoured butter and an amuse-bouche of cured ham, pfefferlings (chanterelle) and olive and garlic cream, in a crisp sweet-dough cup. A main of pumpkin gnocchi with dried pear and brown butter sauce, chopped hazelnuts and grated pecorino cheese alongside a perfectly chilled glass of Pinot Blanc hit the spot, but I cannot resist ordering a creamy iced coffee (more ice cream than coffee) topped with a dollop of fresh whipped cream. That’s when I realize it’s time to hit the wine trail to work off some calories.

Chur, Graubünden’s capital, is considered to be the oldest city in Switzerland. After taking an informative walking tour of the heart of the old town, dinner at the Zunfthaus zur Rebleuten, the former winegrowers guildhall, which dates to the 15th century, is a nice respite. Though the atmosphere is reminiscent of a publican house, the food, from an amuse-bouche of venison braseola with parsnip cream and chanterelles, a recommended mountain-hay soup – a creamy concoction of Alpine grasses, Brut and bacon chips, served with hearty whole wheat bread – and a superb main of delicate white rabbit meat married with lamb tenderloin and drizzled with a lavender gravy, served with spinach spätzle and a medley of parsnip, carrots, cauliflower and broccoli, are worthy of a star kitchen (though likely in smaller quantities). 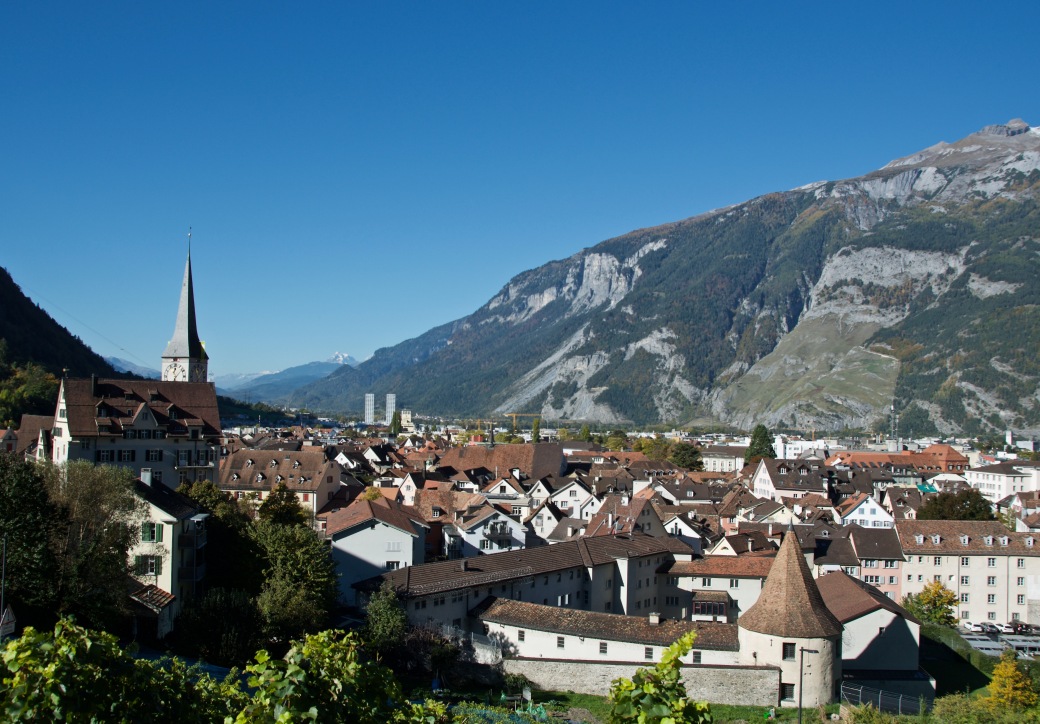 Chur, the capital city of the canton of Graübunden, has a beautiful old town worth exploring. Photo/Nancy Truman

On another night I sample typical Graubünden cuisine at the Veltliner  xWeinstuben at the Romantik Hotel Stern. Its signature tasting platter, Trilogy of the Grisons kitchen, includes Maluns, fried potatoes with homemade applesauce and alpine cheese; Capuns Sursilvans, stuffed, milk-poached spinach rolls, topped with broiled cheese and braised onions; and Pizzoccheri Neri, buckwheat noodles mixed with vegetables, cheese and foaming butter – a perfect dish to pair with Completer. A concoction of dried plums marinated in plum brandy and served with walnut ice cream and the region’s trademark Ibex (mountain goat) made of gingerbread – was one of many of this typical fall dessert I was served, and the best.

Centuries ago, Chur was home to the sugar guild and some of the region’s finest sweet makers, a tradition kept alive by Arthur Bühler, master baker and pastry maker. At Bühler’s Zuckerbäckerei (sugar bakery) in the old town, I sample some of the local specialties such as the melt-in-your-mouth marzipan “peach pits,” first made 120 years ago, and Alpine City cake, named for its alpine-sourced ingredients – flour, eggs, butter and dried pears.

The writer was a guest of Switzerland Tourism.

Trains are the best way to get around, they run like, well, clockwork. An all-in-one Travel Pass lets you hop on and off regional and national trains, buses and even ferries no matter the distance. With a few exceptions, there is no need for reservations even with a first class pass. A seat reservation and supplement is required for the Glacier, Bernina, Gotthard Panorama and Palm expresses. For more information go to https://trainticketsca.myswitzerland.com/

Where to stay and eat

Located in the old town of Chur near the train station, restaurants, shops and museums, the hotel offers old-world charm with four-star amenities and comfort. The hotel and restaurant have been welcoming guests for more than 300 years.

With the castle just a short drive from St. Moritz, Davos or Chur, and 90-minutes from Zurich, booking one of its six-double rooms or three suites is more a treat than a necessity. Room prices start at 370 Swiss francs. As well, reservations are required for lunch or dinner. Expect a wait time of up to six months. Also expect to pay 400 CHF or C$520 per person if you want the full experience of the six-course menu with wine pairings. A new lower-priced guesthouse, a casual restaurant, bakery and shop dedicated to regional food are expected to open in September.

I stumbled on this restaurant in the heart of Malans village, while waiting for a cellar tour on the wine route. The one Michelin-star kitchen is open for lunch and dinner Wednesday through Sunday. Lunch with a glass of wine and tip ran me about 55CHF, or C$75. Walking or cycling this well-signed Rhine Valley route is a sure-fire way to sample some of the regions’s buttery Chardonnays and fruity Pinot Noirs. Signposts point the way to the villages of Malans, Jenins and Maienfeld – a short distance apart – and when you’re tired just hop a train back to the city. I visited Domaine Donatsch Malans (donatsch-malans.ch) and Weine Famillien Liesch (liesch-weine.ch) for tours and tastings. Weinwanderkarten (wine maps) are available at graubuendenwein.ch