“It’s as you wish,” said Mayor Hans Götze, on a walk through Ahrenshoop, a former fishing village turned artist colony on Fischland, Darss and Zingst, a three-part peninsula on the Baltic Sea in the northeast corner of Germany. He is referring to the beach’s
bathing-suit optional policy. “It’s been that way since the 1940s.”

On this late-June day, with the temperature hovering at unseasonably low 16C, it’s hard to imagine anyone opting to go sans suit, or even sans sweater, but this is what I have come to see. Germany may not be the first European to come to mind when considering a sun holiday, but the white sand beaches of the former East German state of Mecklenburg-Lower Pomerania are a local draw, last year attracting 6.8 million visitors — 80% from Germany, the rest mainly from Sweden, Switzerland and Austria.

This little corner of Germany was cut off from the West until German reunification in 1990 and sees far less British or North American tourists, but English-speakers are easy to find. (In 2011, 821 Canadians visited the state.)

From a cliff at the ancient borderline between Vordarss, where Ahrenshoop lies, and Fischland, considered to be the place to see the beach at its best, we watch as waves churn in the tideless Baltic Sea.

Holiday-makers brace themselves against the wind as they traverse the beach with jackets zipped. Walking, cycling, sailing and kite-sailing are favourite pastimes and I’m told a brisk walk in the salty sea air cleanses your lungs of city grime.

With no tide to wash them away, the Baltic beaches are always wide, white and beautiful, but I am disappointed with the weather. This year, like last, is unusually cool, which explains why the beaches are populated primarily by empty red- and blue-striped beach chairs, lined up waiting to be put into service. 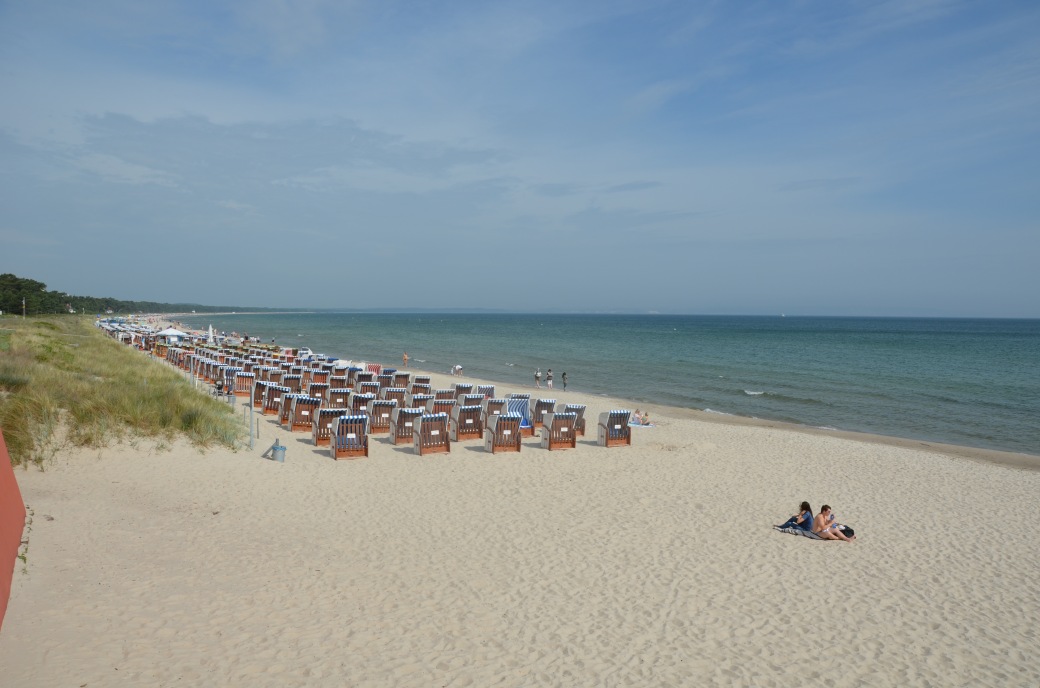 A plethora of red- and blue-striped beach chairs, line the beach at Ahrenshoop, a former fishing village turned artist colony on Fischland, Darss and Zingst, a three-part peninsula on the Baltic Sea in the northeast corner of Germany. / Photo: Nancy Truman

From May to September, the temperature here typically ranges from 25C to 35C, with plenty of sunshine to heat the shallow waters to about 22C by August. (By comparison, Ontario’s Sauble Beach on Lake Huron hits an average high of 19C in August.) And with a
northern latitude of 54 — think Prince Rupert, B.C. — the summer days extend from about 4 a.m. to 10:30 p.m.

Ahrenshoop’s five-kilometre-long beach is hidden from view as I drive alongside the sand dunes. While it is a beautiful beach, the village isn’t dependent on it or the weather. Visitors have come here year round since the Plein Air painters, inspired by the
landscape and thatched-roofed fisherman’s cottages, settled here in the 1880s.

The bohemian, idyllic atmosphere that took root here survived both the Third Reich and the German Democratic Republic. Today, the cottages house art galleries, pottery workshops and boutiques, and even an art school for international and national artists in fine arts, literature, dance and music. In a population of 720, there are more than 20 artists, Mayor Götze and his wife Susann among them.

I visit the Art Cottage, or Kustkaten, a traditional-style fisherman’s cottage, designed by founding Ahrenshoop artists Paul Mueller-Kaempff and Theobald Schorn, that opened as an art gallery in July 1909; and the 350-year-old Dornenhaus, or Thorn House, a favourite of the Plein Air painters, where Friedemann Loeber, makes and sells traditional Fishland pottery. The house and garden double as a gallery for local artists — an enclosed intimate garden reveals a sculpture of a chubby, naked bald man wedged between the legs of a chubby hatted woman. 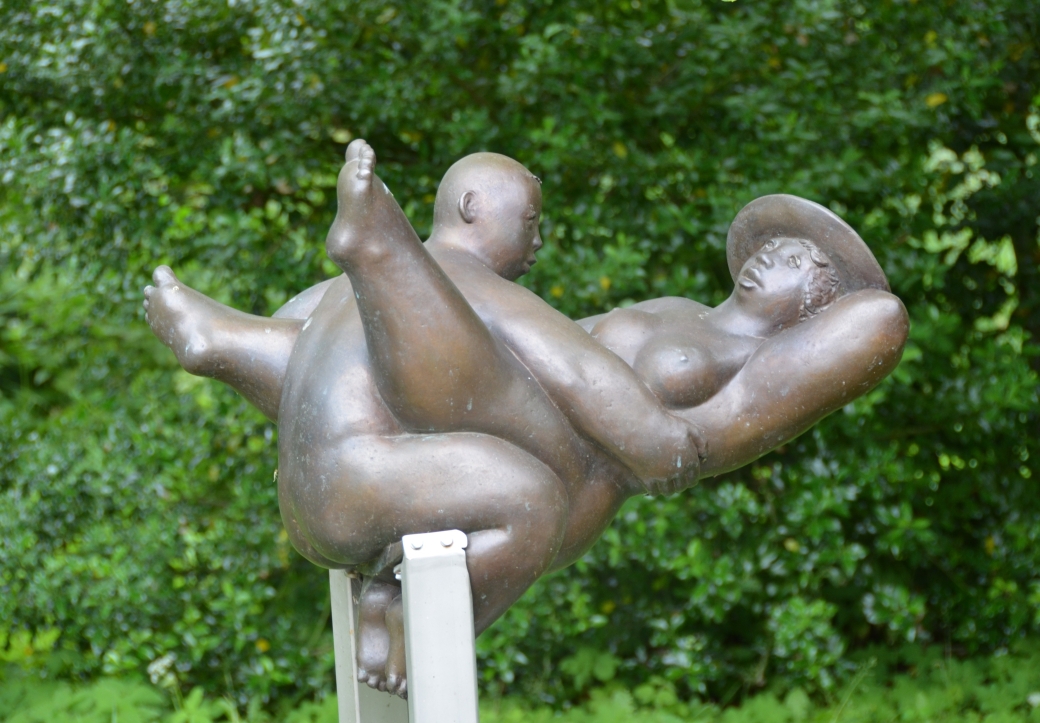 This risqué sculpture sits in an enclosed intimate garden at the 350-year-old Dornenhaus, or Thorn House, a favourite of the Plein Air painters. / Photo: Nancy Truman

Musicians, writers and craftspeople have also been a part of the community since the end of the First World War. Outside the Klanggalerie: Das Ohr — an ear-shaped house featuring audio visual displays and a concert room with two pianos — the owners,
composer Lutz Gerlach and his wife Ulrike Mai, are a big part of the music scene here. Although, there are no concerts scheduled during my visit, I can well imagine how a classical music performance might sound in the small Schifferkirche, or Seamen’s Church. Built in 1951, it gives the sensation of sitting under the hull of an overturned tall ship.

At the Namenlos — translation Nameless — Café, chef Richard Crohn gives me a taste of the culinary arts. He’s chagrined to note his daily menu’s soup features Canadian lobster. “It is not because I’m serving dinner to a Canadian, it’s because they are the best
lobsters I can get,” he explains, and hence a necessary deviation from the organic, local ingredients usually featured. I savour an appetizer of Baltic salmon with crème fraiche and mangold (beet root leaves); a main course of zanderfillet (pike-perch fillets), with a
gratiné of potato and zucchini, white asparagus, spinach and a boat of béchamel sauce on the side; and finish with panacotta with fresh, local strawberries.

Enjoying the garden at the Hotel Namenlos & Fishcherwiege in Ahrenshoop, Germany.

At €35 for three courses, I could get used to this. The café’s best dessert has to be its signature marzipan covered Sanddorn Torte, a slice of which I devoured a few hours earlier for kaffee und kuchen (Germany’s tea time). Rich in vitamin C and antioxidants,
the astringent berries of the Sanddorn grow along the Baltic coast and find their way into everything from cake, to marmalade, juice, tea and candies.

On nearby Rugen Island, reached via a kilometre long bridge from Stralsund on the mainland, Berliners have been enjoying the beaches since the mid-1800s. Today, Germany’s largest island, measuring 974-square-kilometres, has about 1.25 million visitors a year, who come year round to enjoy its diverse landscape of steep cliffs, hilly hinterland with ancient forests and of course, its white-sand beaches.

Ruled by the Huns, fortified by the Slavs, and fought over by the Danes and Swedes, before coming under Prussian rule in 1815, remnants of its storied past remain along the rugged northern coastline at Cape Arkona, including, the ramparts of a Slavic temple
abandoned in the 12th Century; two lighthouses, circa 1827 and 1901, and a radio tower and bunker used during the Second World War.

The Königsstuhl, or Kings Chair, at Jasmund National Park reveals a spectacular view of the chalk cliffs./Photo: Nancy Truman

An early morning visit to Königsstuhl, or Kings Chair, at Jasmund National Park reveals a spectacular view of chalk cliffs and the stone beaches below. Ancient beech trees tower above — about a quarter of the Jasmund’s 2,100 hectares,were added to the UNESCO
World Heritage List last June.

I end the day at Seehotel Binz-Therme in Binz, easing into one of three natural thermal spa pools. There are plenty of four- and five-star properties on the island but the Seehotel Binz-Therme is the only one that draws water from depths of 300 to 1,222 metres
beneath the hotel. I go straight for the pool from the deepest and oldest layer — said to be similar to floating in the Dead Sea. The salt (15% to 18%) stings my skin and turns it red, but in the morning it feels softer.

A promenade separates the town from the beach. On one side the chalk white seaside resorts beckon with their cafés and restaurants, where modern architecture melds with the traditional spa architecture of the 1880s. But the 5.5 km long beach, that curls along Prorer Bay, entices me — if only just to stick my toes into the chilly Baltic Sea I have come so far to see.

Nancy Truman was a guest of the Germany Tourist Office.

BEST OF THE BALTIC

How to make the most of Germany’s beachy side

You can vacation like royalty at the Grand Hotel Heiligendamm. Since its founding in 1793 by Duke Friedrich Franz I, whose doctor advised him to swim in the Baltic Sea to improve his health, the seaside health resort has been favoured by Europe’s nobility.

Guests can learn to sail or kite-surf, take horsemanship and show-jumping, or even a sushi-making class. While there is a fine-grained sandy beach, the spa here is the main attraction.

A fishing village in the 1300s, Warnemuende became a vacation spot for Berliners in the 1850s. Its broad, sandy beaches were the inspiration for the hooded German beach chair used across Europe. International sailing and surfing competitions draw visitors to the Alte Strom (Old Channel).

The widest beach on Zingst, Prerow offers lifeguards throughout the summer, but its popularity makes finding parking in the summer difficult, so consider renting bicycles. A cycling trail runs across the peninsula connecting towns and beaches, making it easy to get around this way.

For all things Germany germany.travel