In the early morning stillness, we wait in an open safari vehicle, peering anxiously into the bush at the spot where our tracker and ranger, Thomas and Solomon, disappeared. Moments later, Solomon returns, to lead us single file through the long, dry grass. A short way in, he leaves the path, guiding us to Thomas who stands about 10 metres from a cheetah – its face smeared with an impala’s blood, made brighter by the sunlight filtering through leafless trees.

Startled by the clicking of cameras, the cheetah springs to his feet, ready, it seems, to charge. But as quickly as he rises, he settles back to gnawing on the impala’s ribs, assured we won’t steal his kill. Though I freeze out of fright, I’m happy to not be directly in
front of the cheetah. Thankfully, while the two at the front look set to flee, Solomon steadies them, offering two words: “Don’t run.”

“Do you think you can outrun a cheetah?” he later asks, noting that cheetahs can reach 110 kilometres an hour in seconds. It is a reminder of the rules of game drives: no sudden moves, no standing in the vehicle, no loud startling noises, and above all else, obey your guides. The rules protect visitors and animals, alike. While adult humans aren’t generally considered to be a meal for cheetahs, running or squatting to take photos alters that perspective.

Solomon’s storytelling gift is a big part of my safari experience. He tells us how the young cub watched his mother and all but one sibling be killed by lions. Last year, he says, the cheetah lost that brother.

By now it’s clear photographing the “big five” — lion, leopard, elephant, rhinoceros and water buffalo — is incidental to the goal of this trip. Exploring Kruger, one of 70 trips created through a partnership between Toronto-based travel operator G Adventures and National Georgraphic Journeys announced last October, doesn’t disappoint the traveller looking for a holistic experience. Time and again we are told, “Put down your cameras and look.” When I do, I see South Africa — the animals, the land and the people — through a different lens.

This cheetah at Karongwe Private Reserve in South Africa wasn’t interested in us other than to say this kill is mine./ Photo: Nancy Truman

As we photograph the cheetah on our second of four game drives at Karongwe — an 8,500-hectare conservation area overlooking the Drakensberg mountain range in Limpopo Province — I marvel at the trust I already place in Solomon and Thomas.

On our first drive, I was fearful as they drove us within 5 metres of a pair of lions resting in the late afternoon sun. But I quickly got caught up in the mating game of the felines, as the male stretched, and rolled toward the lioness, resting his hind paws and tail on hers. Foreplay, someone whispered, seconds before the lioness stood, stared us down then led him away.

After seeing our first lions, we were ready to celebrate. In a clearing, we stood sipping a chilled South African chenin blanc, and munching on homemade chips, sausage rolls and crudite, beneath a dramatic sunset that turned a cloud-streaked sky from yellow, to orange to red. Our cheetah adventure was topped with a break for Nescafé , roibos tea, chocolate chip muffins and a gentle morning sunrise. Later, over a hearty brunch of eggs, toast, fresh-brewed, nutty coffee from a local plantation, fried mushrooms, bacon, broiled tomatoes and fresh fruits, we were able to reflect on the mock charge, agreeing this was “our bonding experience.”

Aside from the bountiful breakfast, the camp serves lunch and dinner buffets, and afternoon tea. The buffets offer a variety of familiar vegetables, fruits and meat, as well as wonderful soft and hard local cheeses. Then there’s the unfamiliar: warthog stew. I am told it taste like pork (but tougher), but I pass on it recalling the warthog and piglets I photographed an hour earlier rummaging around the camp.

The aptly named Chisomo Safari Camp, which translates to blessing, is our home base for two nights. I feel pampered and protected from the moment I arrive and my bags are whisked away to a large tent, perched on wooden platforms. Inside there is an expansive bathroom with a glass-enclosed rain shower, plenty of clean, plush towels and a good supply of toiletries. The double beds kitted out with white cotton sheets, comforter and mosquito net, are placed squarely in the middle of the room. 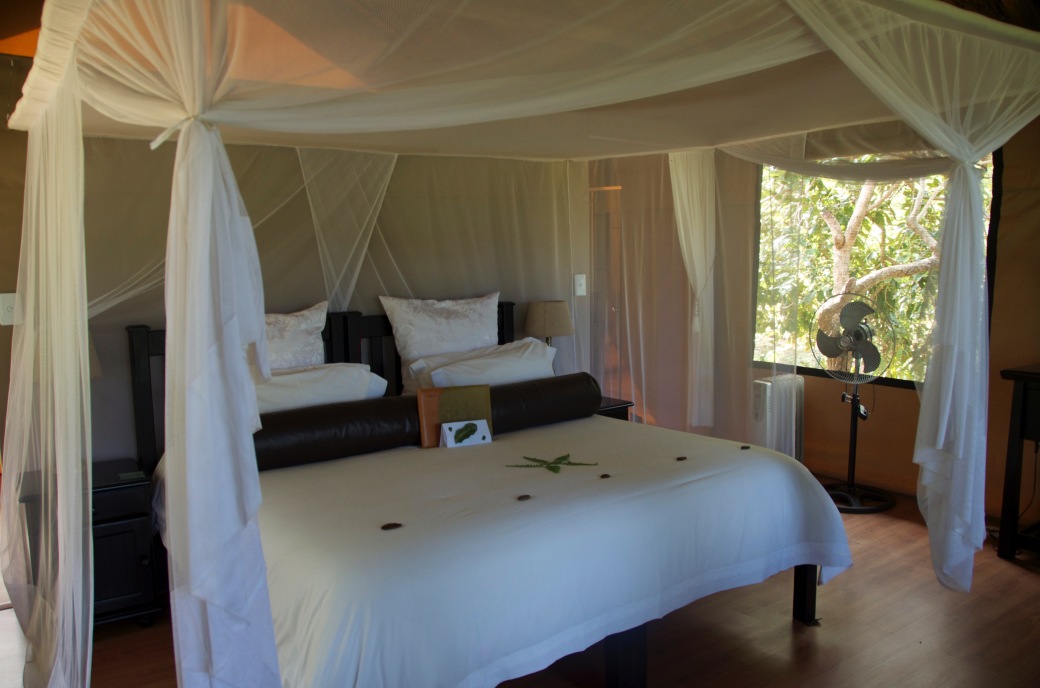 A bed fit for a queen and kitted up with white soft linens and a mosquito net awaits me in my tent at Chisomo Safari Camp in Karongwe, South Africa. / Photo: Nancy Truman

On the day of the cheetah sighting, we met Grant Beverley, a researcher from the Endangered Wildlife Trust’s Carnivore Conservation Program, who explained the National Geographic Big Cats Initiative in Africa and its conservation projects to halt the dwindling numbers of the world’s top felines, including leopards and lions.

Human encroachment and destruction of their habitat is the biggest threat to Africa’s
cheetahs, Grant told us. Kruger National Park is home to about half of the 1,000 or so cheetahs left in the wild in South Africa, and many of the remainder roam between private reserves. That makes cheetahs particularly vulnerable to being shot by farmers, protecting their rare and expensive stocks of waterbuck, sable and disease-free water buffalo.

More shocking is how airlines aid significant international trade in these animals. “If you have flown internationally in the past five years, there is a very good chance you have had some African animal under your feet,” Leopards and lions are shipped as hunting trophies, while live cheetahs go to zoos or to the Middle East for sport hunting and pets. There is hope for change, however. In March, the International Air Transport Association signed a declaration, aimed at reducing the illegal trafficking of wildlife.

“If you have flown internationally in the past five years, there is a very good chance you have had some African animal under your feet.”

The only thing that traffickers and photo tourists seem to share is a focus on seeing
the big five. On our first night at Kubu Safari Lodge just outside Kruger National Park, our excited chatter at dinner drew the attention of another guest who inquired if we had seen the big five. We had not. Our excitement came from the breathtaking views of Blyde River Canyon (third largest in the world) and the lunar landscape of Bourke’s Luck Potholes on the Panoramic Route, as well as the giraffes, zebras and water buffalo we had seen steps from the road.

The next day, an afternoon game drive in Kruger yielded only one of the big five — a small herd of water buffalo. Kruger is feeling the effects of a prolonged drought, but late in the afternoon, at a waterhole we are rewarded with a dazzle of Burchell’s zebras, recognized by their shadow stripe, and a sounder of warthogs. A lone black-backed jackal, made bolder by its hunger, circles these groups, but keeps its distance.

As it happens, we saw the big five twice over, as well as a leopard cub, an elephant calf, and a rhinoceros calf. Still, we all agree the feasting cheetah provided the most memorable moment, on a trip that served up a feast for the senses. A close second had to be watching the king of beasts being led down the road by a seductress.

The writer was a guest of G Adventures.

This story appeared in National Post and Vancouver Sun in 2016