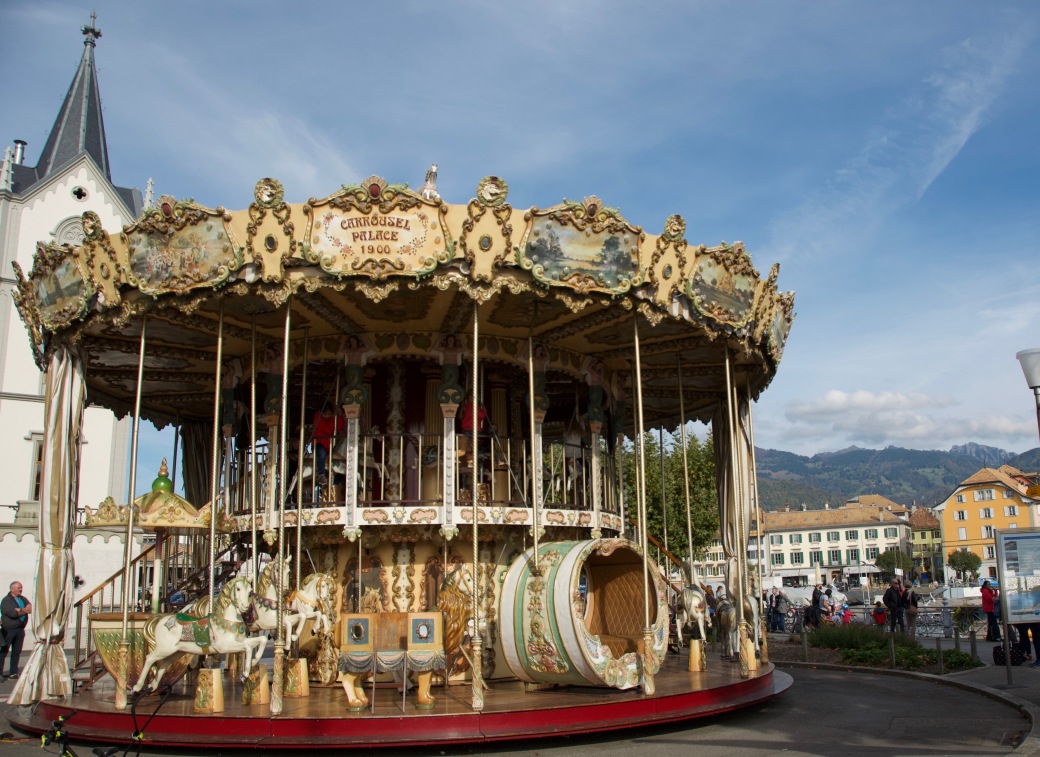 Switzerland’s Lake Geneva, or Lac Leman as the French prefer, has long been the playground of the rich and famous for its tax breaks, anonymity and, of course, its incomparable beauty.

Whether you are a star of the silver screen, a famous singer, a 20th-century Belgian cartoonist or a 21st-century tourist, this Swiss lake — where paddlewheel steamers ply the waters between cities and towns along its shores — has the power to seduce. This is especially true when the sun shines and the Alps — Mont Blanc recognizable among them — stand sharp against a cobalt sky.

When London-born Charlie Chaplin left for Britain in 1952, McCarthy-era right-wing conservatives conspired to have the star of the silent screen barred from returning to the United States. Chaplin later chose to make Vevey — a town of less than 18,000 people on the shore of Lake Geneva, 18 km from Lausanne — his home. Vevey came into its own in the Belle Epoque era, as evidenced by the beautifully restored turn-of-the-century two-storey carousel that greets me as I step off the paddlewheel steamer, and walk the charming lakeside promenade, with its beautifully restored period buildings. 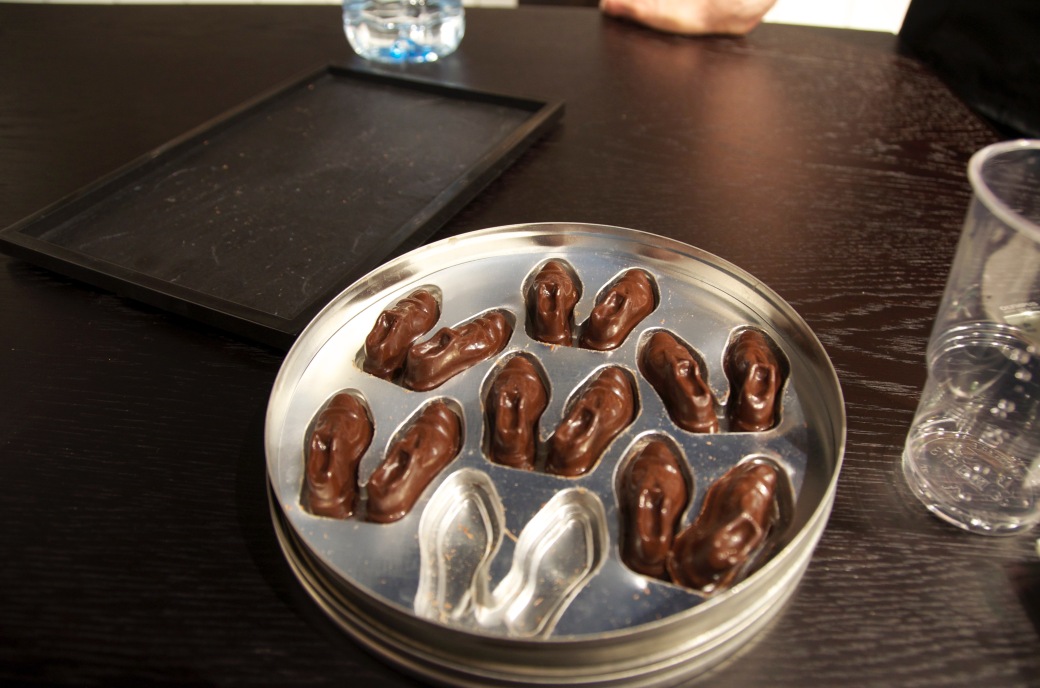 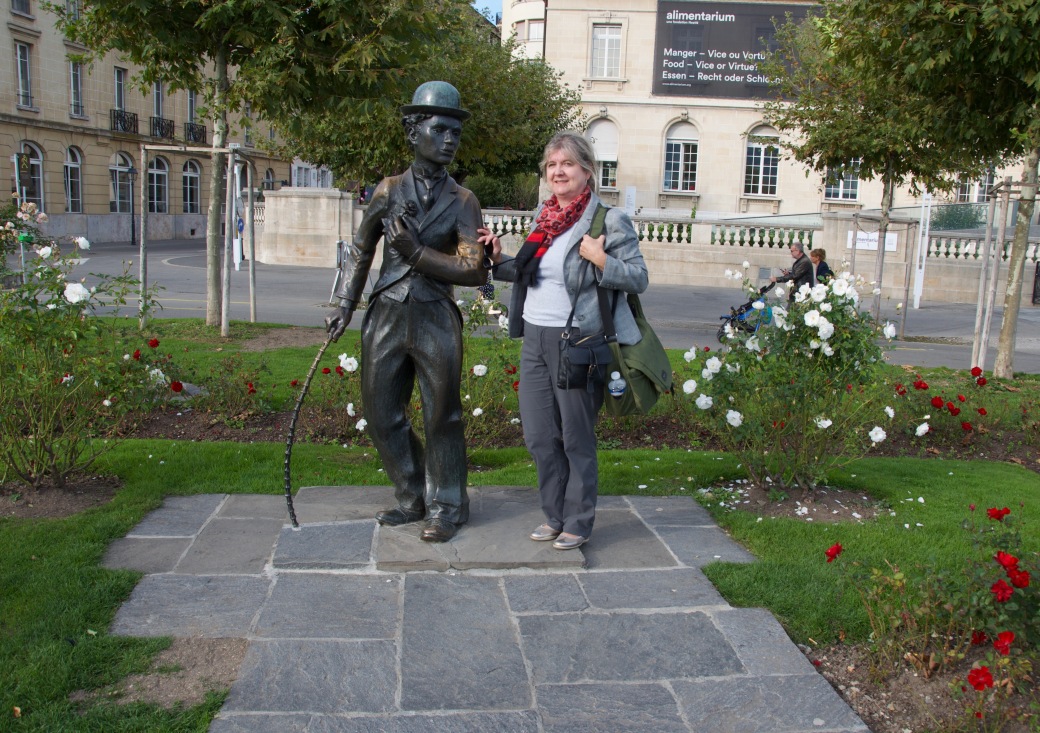 Stopping for a selfie with Charlie Chaplin as the “Little Tramp.” / Photo: Nancy Truman

A queue midway down the promenade is my first Chaplin spotting: I line up for a selfie with the actor, immortalized in bronze as the “Little Tramp” in the film Modern Times. But the real homage to Chaplin — the actor, screenwriter and producer — is a short bus ride away at Chaplin’s World (www.chaplinsworld.com), which opened in Corsier-sur-Vevey in 2016. Manoir de Ban, Chaplin’s 14-hectare estate, includes the restored manor house and a new building that focuses on his movies, from sets and film clips, to the costumes he wore.

My hunt for Chaplin took me next to Laderach Chocolatier Suisse Atelier (www.laederach.ch). The chocolatier has cobbled the actor’s famous creased leather shoes out of fine dark chocolate, laced them up with chips of his favourite caramel, and packaged them in a film reel can. For $35 the “chocolate connoisseur” course taught me to distinguish chocolate by provenance and guess which countries inspired its latest taste sensations, and the shoe. Hint: Bone up on where lemongrass, chai and green tea come from.

No doubt, Chaplin enjoyed walks among the Unesco World Heritage listed Lavaux Vineyard Terraces, stretching 30 km along the shores of Lake Geneva. The south facing terraces, likely crafted by Benedictine and Cistercian monks in the 11th century, ensure great Grand Crus, and in particular Chasselas, a grape varietal indigenous to this area. Take the train or a paddlewheel steamer to Cully and climb up to Epesses to enjoy sweeping vineyard views, Lake Geneva and the Alps beyond, while sipping the product of the small vintners’ hours of hard work.

During harvesting (September-October) you’re less likely to find tasting rooms open, but don’t despair: Les 11 Terres Wine co-operative (www.11terres.ch), owned by 11 local vintners, offers a tasting menu and a wide choice of bottles to purchase. It also offers an assortment of cheeses, cured meats, crackers and jams to go with a bottle of wine while enjoying a view of Lake Geneva from one of the picnic stops sprinkled along the wine route. Obrist Artisans du Vin (www.obrist.ch) in Vevey, which has been bottling and selling Lavaux wines since 1854, also offers a great selection of local wines available for tasting and for purchase, including some rare, aged Chasselas.

Over the three-course seasonal lunch at Auberge de L’Onde (www.aubergedelonde.ch) in St-Saphorin, a picturesque village hidden among the vineyards, I discovered the Chaplins dined here most Sundays. The fall menu included a delicious pumpkin soup with peanut foam; Lake Geneva perch meunire served with crunchy frites and seasonal vegetables; and an airy lemon mousse for dessert. Jerome Ake Beda, Maitre d’Hotel and sommelier since 2006, paired the meal with a perfect, crisp Chasselas. Born and raised in Cote d’Ivoire, Ake Beda won the title of Sommelier of the Year 2015 from the Gault & Millau in Switzerland, despite becoming a sommelier “by accident.” The three courses without wine cost $80.

Nyon, a picturesque walkable town nestled amid the vineyards of La Cote halfway between Geneva and Lausanne, is considered Switzerland’s oldest city. Roman ruins found beneath city streets date to the rule of Julius Caesar, who after conquering Gaul established the colony of Iulia Equestris with Noviodunum.

In the last century, Nyon gained fame as the home of Swiss physicist and scientific adventurer Auguste Piccard, whom fans of Tintin comics will know as Professor Calculus in L’Affaire Tournesol. Belgian cartoonist Herge drew on local scenes to create his fictional world. Fans can follow in their hero’s footsteps along the lakeside promenade to the professor’s house, visit the local fire station to see the preserved 1953 Willys Jeep fire truck, and find the statue of Master Jacques — a medieval knight, who earned the right to form a combat company.

Restaurant La Pinte (www.lapintederive.ch), a short distance from Master Jacques on Rue de Rive, serves up two local dishes steeped in the region’s history. I start with a decadent treat of breaded, deep-fried Gruyere served with gherkins and pickled onions, which dates to 1855 when Vaudois soldiers helped the French take the fortress of Malakoff in Sevastopol, I also learn the secret to eating Papet Vaudois: Scoop pork sausage from its casing, then mix the meat with creamy mashed potatoes and leeks cooked in white wine and bouillon.

The La Cote region is home to several wineries, all offering sweeping views of vineyards and Lake Geneva, but the Domaine de Montbenay (www.montbenay.ch) in nearby Mont-sur-Rolle offers something extra. The estate, which has been in the same family since the 16th century — with parts of the manor and cellars dating to a 12th-century monastery — inspired current owner Maurice de Watteville to create a wine museum.

Domaine de Montbenay, a winery in Mont-sur-Rolle owned by the same family since the 16th century — with parts of the manor and cellars dating to a 12th-century monastery — inspired the creation of a museum. / Photo: Nancy Truman

Between picking grapes by hand, aging his wine in oak barrels, bottling and labelling it, Watteville tries to make time to take tour groups through his collection from earthworks, to harvest and bottling, finishing with his collection of pitchers, carafes, bottles and wine festival souvenir glasses. I sampled his Chasselas and Pinot Noir and found both excellent. The cost was $15 and $20 a bottle, respectively. Call or e-mail ahead to arrange a tour, and be sure to brush up on your French to get the most from your visit.

— An all-in-one Travel Pass lets you hop on and off regional and national trains, buses and even ferries no matter the distance. With a few exceptions, reservations are not required, even with a first class pass. To purchase passes, go myswitzerland.com and click the Transport link for options.

2 thoughts on “Pure Swiss bliss: More than cheese and chocolate along the shores of Lake Geneva”

Leave a Reply to the #1 Itinerary Cancel reply